A New Visit to an Old Place

I spent my day doing something I haven’t done for 15 years. I walked around Iowa State’s campus. I was on a college visit with my stepson and my husband. My stepson is only 16 and a sophomore but he’s been asking to visit and who am I to tell him no?

It’s a weird feeling to walk around your college 15 years after you’ve graduated. So many things look the same but so much has changed. I attended Iowa State from 1999-2003 before social media completely took over. When I started my freshman year, some of us had cell phones and we still had to call collect to call home. The internet and email were still fairly new and texting didn’t really come about until my senior year of college. Even then, it was rarely used. I’ve often heard there is a micro generation born between the years of 1977-1983. These people (myself included) had an analog childhood and a digital adulthood. I consider myself lucky in this respect. The digital age was just beginning as I was entering adulthood.

Several years ago, I ran into a college friend at the Spencer Fair and he was telling me that his younger brother was now attending Iowa State. We talked about how different it was for him vs us and we both agreed social media has somewhat ruined the whole bar scene. Look, I’m not dumb or naive, I know student don’t sit in their dorm rooms and study every single night. If we wanted to see what everyone was up to, we had to call their dorm room and hope they were there. Or just venture out on our own and hope someone was out and about. Or you had to make plans in advance. Now everyone grabs their handy dandy cell phone and checks everyone’s Snapchat map or Twitter to see where everyone else is. It takes some of the spontaneity out of it.  Some of the best nights of my life were when my roommate and I would randomly decide to go get a drink and end up running into 10 other friends and hanging out all night. Maybe that still happens, I don’t know. I don’t exactly go out in the college bars anymore. Those kids think I’m ancient. I guess watching The Office on a Saturday night isn’t the most exciting thing…

I do have to say, visiting the campus as a parental figure is quite different than being there as a student. I definitely appreciate the opportunity more. I mean, no one really appreciates much at 18. If I could go back to college and know what I know now, I’d take advantage of MORE of those opportunities. Like studying abroad or getting involved in more clubs. Also I’d have started drinking coffee earlier but there were no Starbucks then. Maybe I should be an admissions counselor and dispense all my advise onto those incoming students…Oh and instead of wearing sweatpants and my ISU sweatshirt, I was wearing jeans, a T shirt, and a cardigan. Just like Cher Horowitz wearing her “most responsible outfit”. (10 points if you got that reference.)

So after the visit, we went to the bookstore and looked around. I successfully didn’t buy any more Iowa State gear. That’s a first for me. Then we went to Hickory Park. I think that might have been the highlight of the trip for my stepson. If you’ve been to Ames and haven’t been to Hickory Park, what’s wrong with you? It’s the best! I had the Swiss, Bacon, and Guacamole burger with no bun and fries. We got the Peanut Butter Cup Sundae to split. That was also delicious. Ever notice all of my blogs include food? It’s my love language. (I actually used that line on my husband tonight. He was going out with his oldest daughter and I mentioned I was jealous he was having prime rib and I wasn’t. He brought some home for me. He gets me.) 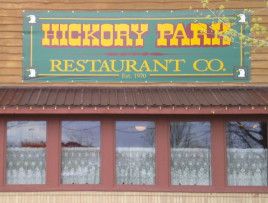 Speaking of prime rib, tomorrow is Mother’s Day so I bet people are going out for brunch. Lucky for me, I get to eat prime rib in my jammies at home. Happy Mother’s Day to all the moms, stepmoms, grandmas, aunties, and all the special ladies out there!

** I actually took the pic featured in this blog. I couldn’t get my husband and stepson to take a pic with me. Also, the pic of the Clueless movie is not my original. Because I was 15 when that movie came out and had no access to any graphic design software.***