A Blog About My Dog

” Is that a fox?” ” No, it’s my dog…” “Is that a wolf?!” “No…it’s my dog.” I get so many questions about my dog I decided to dedicate an entire post to him. I mentioned it before, but my husband surprised me with our dog on Christmas Day 2010. We’d talked about getting a dog in the spring, so I was shocked when he opened the door that morning and handed me a puppy!

Deuce shortly after my husband surprised me 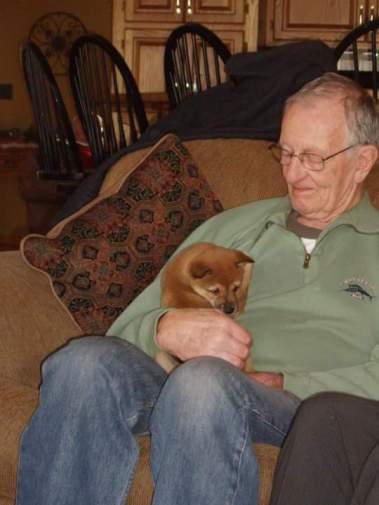 My grandpa and Deuce..one of my favorite pictures

First of all Deuce is a Shiba Inu. No, he’s not a fox, or a wolf, or a hybrid of some sort. Shiba Inus are native to Japan and some consider them to be a smaller version of an Akita. Shibas grow to be about 30 pounds so their medium size makes them pretty attractive to anyone considering a dog. However, a Shiba is NOT for a first time dog owner. Check out this video from Animal Planet.

Deuce at about 2 months old 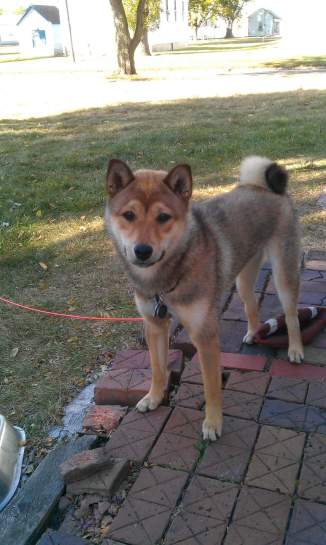 Simply put, Deuce can be a real jackass. ( Like owner, like dog, huh?) He hates being woken up, hates anyone messing with his food, and hates anyone telling him what to do. Wake him up or grab one of his toys, and you’ll be rewarded with a snarl.(Again, similar to his owner.)  He’s very protective (especially of me if my husband isn’t home) and he isn’t always warm toward strangers. However, if he decides he likes you, he’ll never leave you alone. Ask my mom or my stepdaughter’s boyfriend- whenever one of them is at the house, Deuce goes crazy and has a fit if they aren’t petting him. Speaking of being petted, Deuce will lay by you for hours if you pet him. If you won’t, he’ll slap you with his paw until you do. It’s adorable and annoying at the same time. If I’m really lucky, he will curl up next to me and sleep (until I wake him up and he gets mad!) 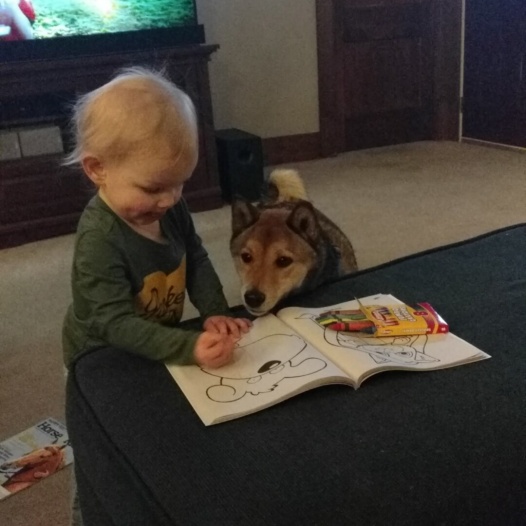 Laying in the sun

As far as other dogs, some Shibas like them and some don’t. Guess which category Deuce falls under? He used to be ok until 2 larger dogs were loose and attacked him. Now he hates any dog, especially those that are bigger than him. My mom babysat him for an afternoon and he finally tolerated her 3 dogs. We had a Puggle for about 3 years until he passed and Deuce tolerated him but never showed any affection toward him. The day Winston (our puggle) died, Deuce went and laid in his doghouse all afternoon. So maybe he did like him a little….

Shiba Inus are a huge flight risk. If you want a dog that you can let off the leash, don’t get a Shiba. If Deuce get’s free, it’s at least a half hour until I can catch him.  He can run forever. Also, as part of his jackass behavior, he will get close to you and run away when you reach for him. This is part of the reason our next house will have a privacy fence. And don’t think a chain link fence will hold him. Shibas can climb and will go right over the top. My aunt and uncle have a few Shibas and learned this the hard way.

Geez, reading my last few paragraphs would talk anyone out of getting a Shiba. I don’t mean to do that- they are great dogs! My parents have had one for years. (His name is Ace…and ours is Deuce. Real original, huh?) My aunt and uncle own several and tell everyone what fantastic dogs they are. Shibas are extremely loyal and Deuce is no exception. Like I said, when he loves you, he LOVES you. He’s energetic and always up for a long walk or a run. In fact, if he sees my husband or me putting on running shoes, he starts prancing around the house and freaking out. And if my husband goes running without him (He runs quite long distances and only takes him if he’s going 3 or 4 miles.), he lays by the door and cries.

Oh- and if you decide to make the leap and get a Shiba, be prepared for the shedding. Shibas are super great about cleaning themselves ( like a cat!) but twice per year they shed like CRAZY. Like so much, that you can pull chunks of fur out of the dog. My husband seems to enjoy pulling chunks out and leaving them on the ottoman for me to find later. It looks like someone killed the Easter Bunny.

All in all, Deuce is a pretty cool dog. As long as you know his quirks, he’s really easy to get along with. (Side note: I’m watching Parenthood right now. How come no one in this whole big family has a dog? This is a great show but really, out of 4 siblings no one has a dog? Maybe I don’t want to be a Braverman after all… )

What kind of a dog do you own? I love ALL dogs, so feel free to tell me all about yours. Or send me pics…now, I’m off to go spoil mine.